Riverstone South is a development proposal within the Highway 10 South Small Area Plan. The City approved the Preliminary Plat on April 13, 2021. The preliminary plat includes 243 single family homes. The City has received an application for Final Plat for the First Addition, which includes 83 homes. 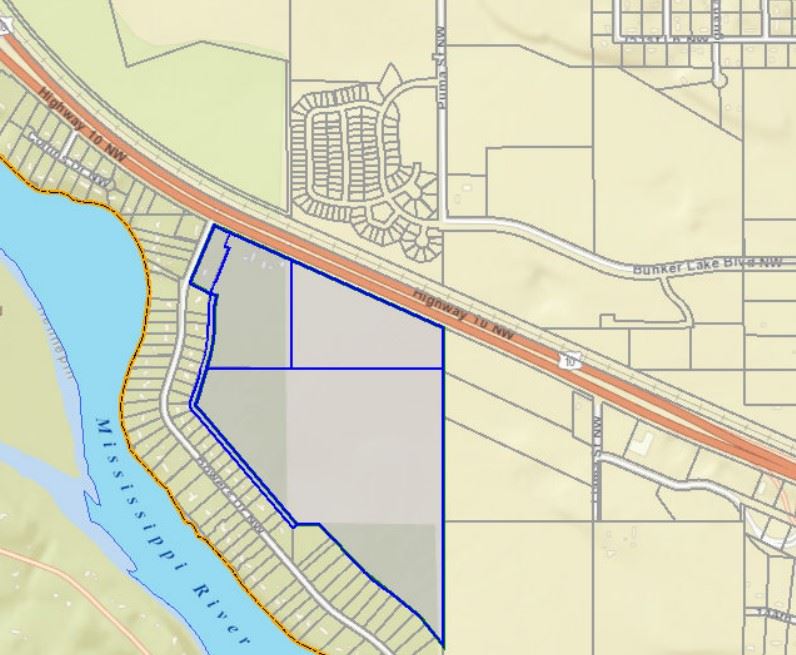 Due to the size of the project, and the change to the City's Comprehensive Plan, Statute requires that there is an Environmental Assessment Worksheet (EAW) for the project. As the Responsible Governmental Unit (RGU), the City of Ramsey is issuing this Environmental Assessment Worksheet (EAW) for Riverstone South, which is in the Resources Documents section of this page above for review. The public comment period on this EAW runs from February 9, 2021 until 4:30 pm on March 11, 2021. Please reach out to the City at planning@cityoframsey.com with any questions or comments on this document.

The City of Ramsey is currently reviewing a proposal for a 242 lot detached single-family development east of Bowers Drive. Bowers Drive is the longest dead-end street in the City with a single access point. For purposes of public safety, the City desires to make a second connection to Bowers Drive through the new Riverstone South Development. The proposed layout of Riverstone South should create minimal traffic impacts on Bowers Drive.

The Police Department is in support of the proposed roadway which would connect the existing cul-de-sac of Bowers Drive that has existed for a number of years to the new Riverstone South Development. Due to the nature and location of this proposed road, the Police Department believes the positives to public safety outweigh any possible negatives which could result from the change. We believe having a second access would increase our ability to quickly render aid to the Ramsey Residents who live on this existing street, who we serve and protect. As the specifics of this road are discussed further, the Police Department would request it be constructed for year-round access and not have breakaway barriers or gates.

The proposed road that would connect Bowers Drive with the new Riverstone South Development is an important and vital roadway connection for Public Safety. Public Works Staff and equipment are a vital part of every large-scale emergency response effort. Therefore, the Public Works Department recommends the access road be built to a minimum width of 24 feet with B Style Curb and designed to 9 Ton Specifications. This road needs to be designed to handle large emergency equipment, such as Fire Engines, Public Works Vehicles and Electrical Line Repair Vehicles. As also mentioned by Police and Fire, this is a long cul-de-sac road with only a single access point.

For additional information, please contact the Ramsey Planning Division at (763)433-9824.